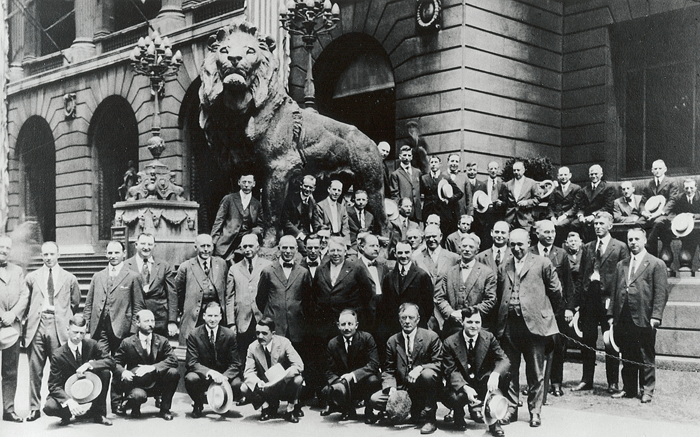 Lions Clubs International was formed in 1917 by a Chicago business leader, Melvin Jones, who wondered what would happen if people put their talents to work improving their communities. As a result of his inspiration, 1.4 million men and women today are members of the world’s largest service club association with thousands of members based in hundreds of clubs throughout the British Isles.
As part of Lions Clubs International’s Centennial celebration in 2017/18, Lions around the world adopted the message: Where there’s a need, there’s a Lion, and worked to achieve a remarkable Centennial Service Challenge by serving over 240 million people worldwide.
​ To thank them, the then Queen sent her equerry Colonel Edward Wyndham (later Lord Leconfield) to Canada. He was so impressed that Windsor (Ontario) Lions Club agreed to sponsor the first London club, with Lord Leconfield as its founding Charter President.

​Today, HRH The Countess of Wessex is a member of the Wokingham Lions Club and Royal Patron of the Lions Clubs of the British Isles. The support of the Countess has included carrying out the opening ceremony for the Lions shelter at the National Memorial Arboretum.
Lions Clubs: A little bit of history!
1917: Having seen some of the social problems created by World War 1 Melvin Jones, a Chicago businessman, told members of his local business club that they should look beyond their own business issues and do more to help help their local communities and those of others around the world.
That led to his club contacting other similar clubs and organisations across the USA and at a meeting of them all on 7th June 2017 the International Association of Lions Clubs was formed.
It’s guiding principle is and remains “unselfish service to others”.  Hence the Lions motto is “We Serve!”

1925: Helen Keller, an American author, political activist, and lecturer and the first deaf-blind person to earn a Bachelor of Arts degree, challenged Lions to become ‘Knights of the Blind’. Lions adopted Sight Conservation and work for the blind as a major service activity which continues to this day.  Just 5 years later Lion George Bonham creates the first ‘white stick’ to aid visually impaired people.

1945: Lions assist in drafting the United Nations Charter and have been part of the NGO section of the UN ever since.

1957: Lions launch youth programs including Leo Clubs, with the aim of encouraging community service & involvement from a young age.

1968: Lions Clubs International Foundation (LCIF) was established. This is Lions helping Lions around the world by assisting with large scale humanitarian projects that are too costly for local Lions clubs to finance on their own.

2007: the Financial Times ranked LCIF as the best non-governmental organisation worldwide to partner with.

2017: Lions celebrate a century of service. The centennial international convention was held in Chicago where it all started!
​
Lions today are on a Mission to serve
Our Mission is “to empower volunteers to serve their communities, meet humanitarian needs, encourage peace and promote international understanding through Lions clubs”.
Lions Clubs International aims to be a global leader in community & humanitarian service. There are currently 47,000 Lions clubs comprising 1.4 million members in over 200 countries throughout the world.